Gabriele Münter purchased the house on Kottmüllerallee in Murnau on 21 August 1909. 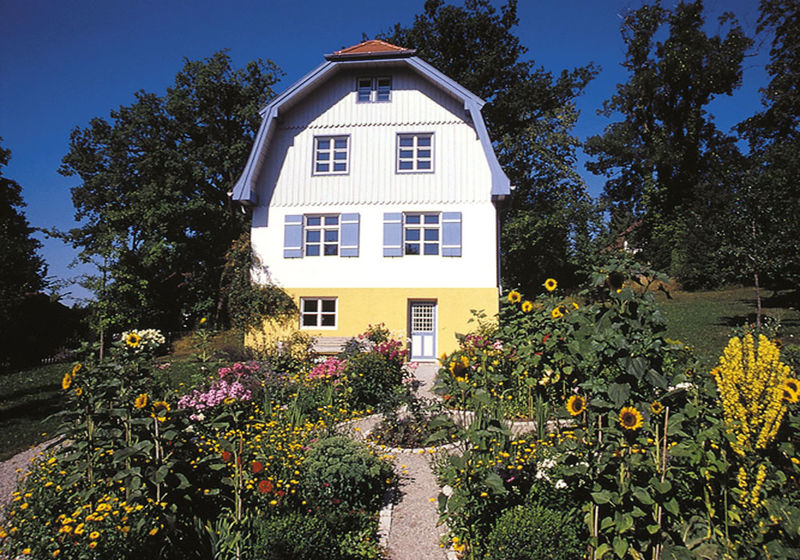 From then on until 1914,Gabriele Münter (1877-1962) and Wassily Kandinsky (1866-1944) often stayed in this house, which is also referred to as the “Russenhaus” (“Russian House”) in common parlance. They furnished it together, laid out the garden and painted the furniture according to their own designs.

The Murnau landscape, in particular the house itself, its garden and the immediate environment became an important source of inspiration for Münter and Kandinsky. They often painted the view from the window towards the church and castle as well as the chain of mountains. Based on the involvement with the landscape, Kandinsky’s painting evolved towards abstraction.

The Münter House also played a decisive role in thehistory of the “Blue Rider”. It became an important avant-garde meeting place.Franz Marc, who lived in nearby Sindelsdorf,Alexej von Jawlensky, Marianne von Werefkin, August Macke and Arnold Schönbergas well as collectors and critics often came to visit. The working sessions forpreparation of “The Blue Rider” almanacwere held there in October 1911. In addition to Münter and Kandinsky, Franz and Maria Marc as well as August and Elisabeth Macke were involved.

When the First World War started on 1 August 1914, Münter and Kandinsky initially fled to Switzerland, since Kandinsky belonged to the “enemy camp” as a Russian. In November of 1914 he returned to Moscow, where he was to remain until 1921. Gabriele Münter lived from the summer of 1915 until December of 1917 in Sweden and settled in Copenhagen after that.
Münter returned to Germany in early 1920. The painter lived together with her later life companion, art historian Johannes Eichner (1886-1958), at the house in Murnau again from 1931 until her death in 1962. In the cellar of the house she stored an immeasurable treasure of paintings, primarily from Wassily Kandinsky and her own works as well as those from other protagonists of the “Blue Rider” movement and their ambit, and therefore also saved these paintings during the era of National Socialism. Gabriele Münter donated important parts of this unique collection to the Municipal Gallery at Lenbachhaus in Munich on the occasion of her 80th birthday.

In accordance with the artist’s wish,the entire Münter House was established as a place of remembrance of her art and artwork by Kandinsky, and madeaccessible to the publicsince the renovation in 1998/99. It was restored to its original condition from 1090 to 1914. Due to the rich furnishings with paintings, graphic art and reverse glass paintings by Kandinsky and Münter as well as examples of folk art which they collected and with their own painted furniture, today the house once again conveys a living impression of the atmosphere which prevailed here before the First World War.

There is no parking area available in front of the Münter House.
There is a rail connection every hour from Munich-Murnau. 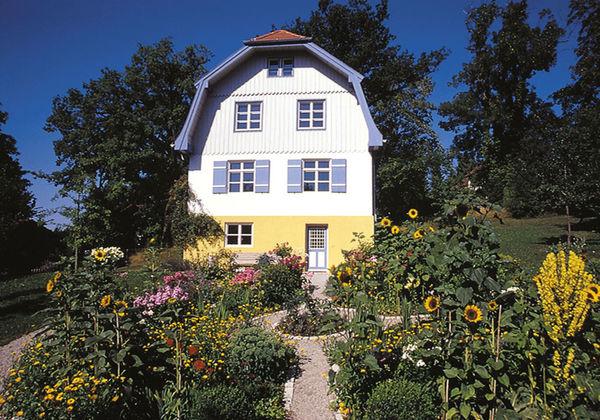